What is An Optical Encoder?

An optical encoder is an electro-mechanical motion sensor and feedback device consisting of an LED light source, a photodetector, and a disc with slot-like apertures.

A light pulse is created when an opening in the rotating disc allows light from the LED to pass through and strike a paired photodetector. The photodetector is typically an array of photodiodes arranged so they provide two signals which are out of phase by 90 electrical degrees.

The light pulses alternate between on/off as the disc turns with the rotation of the shaft, alternately blocking or allowing light to pass through. The photosensor is connected to an electronic circuit which translates the light pulses into an digital square waveforms (high and low signals).

How do optical encoders work? 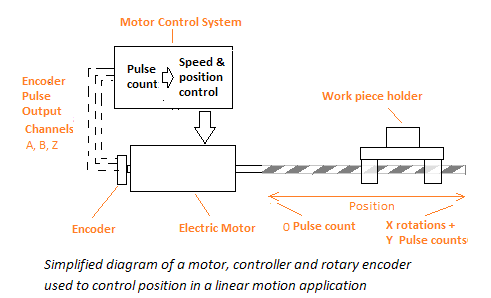 Optical rotary encoder discs can be fabricated with different numbers of slots within their 360-degree perimeter. Some are as low as 24, while high-resolution optical encoders may have 20,000 or more. The more pulses per revolution, the smaller each unit of distance measurement.

As the motor shaft rotates, the optical encoder converts light pulses into electrical pulses, which are then transmitted to a motion control system.

A motion control system coupled to an optical encoder is designed to count the number of pulses the encoder generates in order to determine the rotational position of a shaft, its speed, its rotational direction or its rate of acceleration.

Optical encoders typically have three output channels. Channels A and B provide count and direction signals, while a Z channel is used to verify accuracy of the overall count: it emits a pulse once every 360 degrees.

What’s the function of an optical encoder?

Optical encoders serve to close a feedback loop in which the controller is used to manage a device’s linear position. Examples include a workpiece position in a CNC machine or gantry robot, or a workpiece’s angular/rotational position in web-based manufacturing applications.

A traditional through-bore rotary encoder has a hollow shaft that is mated to a motor shaft of a matching size. The encoder body is typically attached to the back of a motor frame or casing and the encoder shaft is attached to the motor shaft with set screws. This creates a highly compact unit.

Quantum Devices manufactures optical encoders in sizes ranging from .787” to 2” in diameter, and from .813” to 1.23” high. Bore size and other features can be customized to suit your application.

What are the different types of optical encoders? 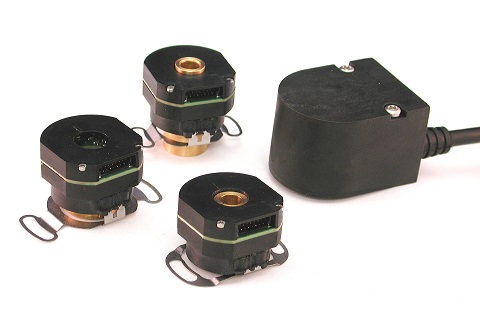 Absolute optical encoders can determine the exact angular position, and give the absolute position (starting point) as soon as they’re powered on. Having an absolute position immediately on startup is important for safety reasons in certain applications.

There are two sub-types of absolute optical encoders: single-turn encoders give the absolute position within a 360° rotation (typically used for shorter distance measurements). Multi-turn encoders also give the position within a single rotation, and they have multiple shafts and discs for counting revolutions (typically used to measure longer distances or more complex positioning data).

Are all optical encoders created equal? 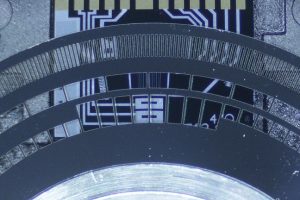 A portion of an optical encoder disc with the photosensor visible beneath.

Quantum Devices’ optical rotary encoders use a patented interlaced photodiode array designed to translate light intensity to electrical current with a high degree of accuracy, precluding the need for encoder potentiometers. There are several fundamental design differences between our encoders and our competitors which affect the output signal quality.

We maximize signal generation, providing better noise immunity and allowing for greater total indicator runout (TIR). We also design our discs to minimize the chance of collecting debris which can cause obstructions to the light path.

What are optical encoders used for?

Optical encoders are used to measure and control rotational motion across a wide range of applications, including: