How the QM35 and QML35 Stack up Against the Competition

Quantum Devices QM35 and QML35 optical encoders are high performance, low profile bearingless encoders ideal for high volume OEM applications and priced competitively for all sizes of motion control projects. The QM35 and QML35 are both built upon the Q35 bearingless platform and offer similar designs. The core difference between the two is the QM35 offers full complement (differential) signals while the QML35 provides single ended TTL outputs. Also, the QML35 is optionally available with 3.3V input/outputs.

The QM35/QML35 low profile rotary encoders are also excellent drop-in replacements to two popular optical bearingless encoders; these will be referred to as Competitor’s Encoder A and Encoder B. This document looks to provide a comparison between the Quantum Devices and Competitor designs. All of the abovementioned rotary encoders are of the transmissive optical design. As is typically the case with a transmissive optical encoder, the signals are created by the opening and closing of light paths from the light source to the photo detector (photodiodes), with the code disc as the apparatus that shutters the light. In order to compare effective sensing areas, measurements of both the sensor and disc were taken for each encoder. The effective sensing areas were then calculated and compared. Additionally, the LED (light source), the disc constructions and the assembly processes were evaluated.

The table below offers a consolidated visualization of the differences evaluated in this document. These characteristics are above and beyond mechanical and electrical differences which would easily be found on a specification sheet, such as package size, frequency limitations, commutation options, line count options, etc. 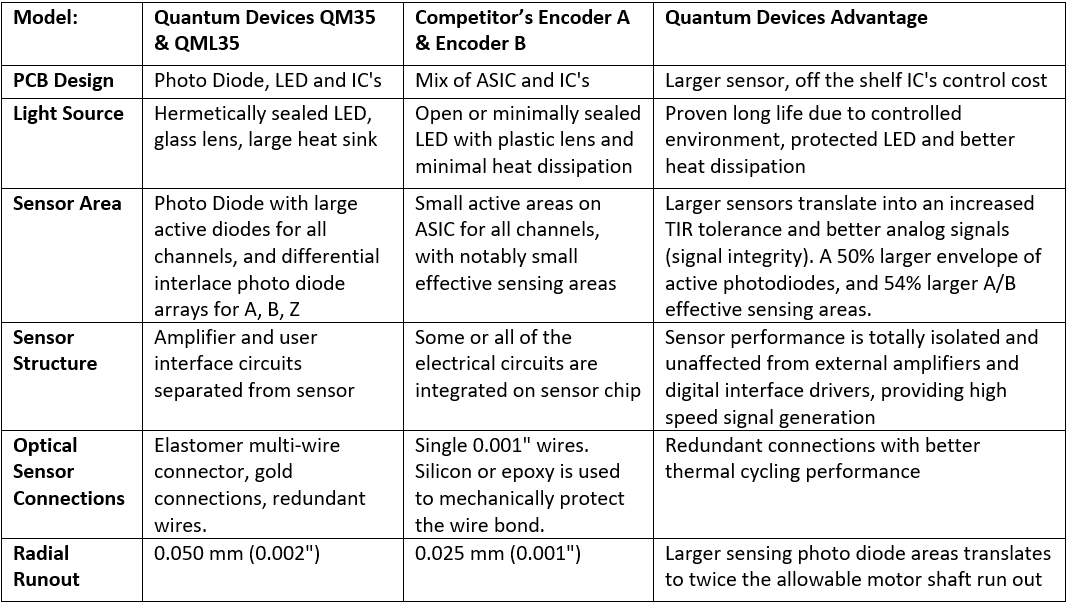 The photos below show a side-by-side comparison of the Quantum Devices QM35 (left) and Competitor’s Encoder A (right) silicon semiconductor sensors. 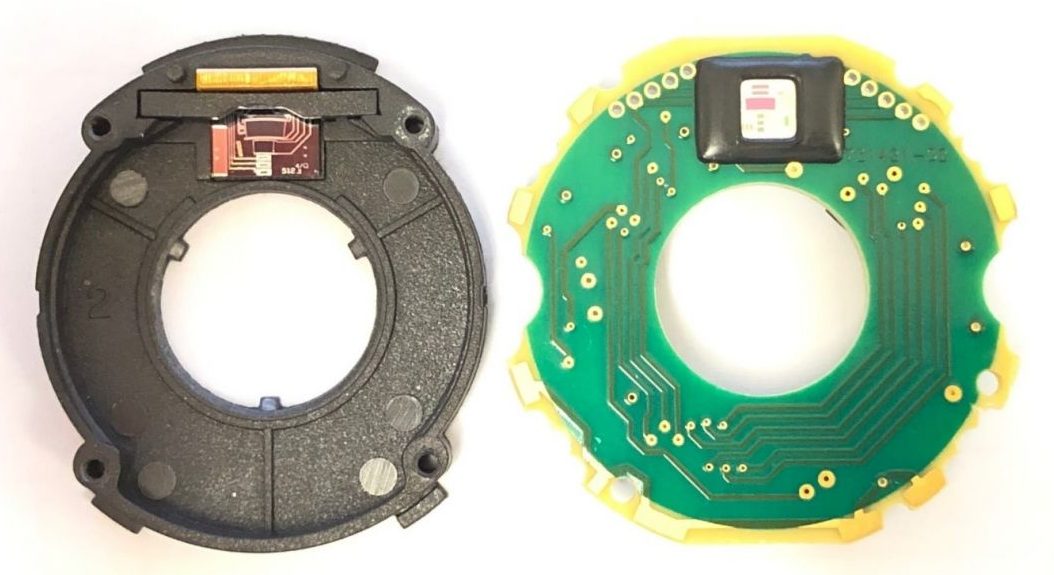 The sensor on the QM35 is Quantum Devices’ patented interlaced photodiode specifically designed to translate light intensity to electrical current. The sensor is adhered to the polymer sensor base, and the electrical contacts are made with an elastomer multi-wire connector. All the connections are gold, and redundant wires connect to each of the sensor signals with the connector compressed between large pads on the sensor and PCB.

The sensor on the Competitor’s Encoder A is embedded in an ASIC (Application-specific Integrated Circuit). The ASIC design means that in addition to acting as a photo current device, the silicon sensor also houses amplifier and user interface circuits. In this design, the ASIC is adhered to a PCB and single 0.001″ wires are thermo-sonically attached to each sensor connection. Silicon or epoxy is used to mechanically protect the wire bond.

The same comparison is illustrated for the silicon semiconductor sensors in Quantum Devices QML35 (left) and Competitor’s Encoder B (right). For these designs both Quantum Devices and the Competitor mount the photodiode sensors in a polymer base. The Quantum Devices QML35 base is similar to the QM35 and uses the same elastomer multi-wire connector with gold connections, compressed between the same large gold pads on the sensor and large gold pads on the PCB. In this case, the Competitor uses a similar ASIC to their Encoder A and it is connected with the same single 0.001″ wires, however, the sensor is adhered to a polymer base rather than a PCB. 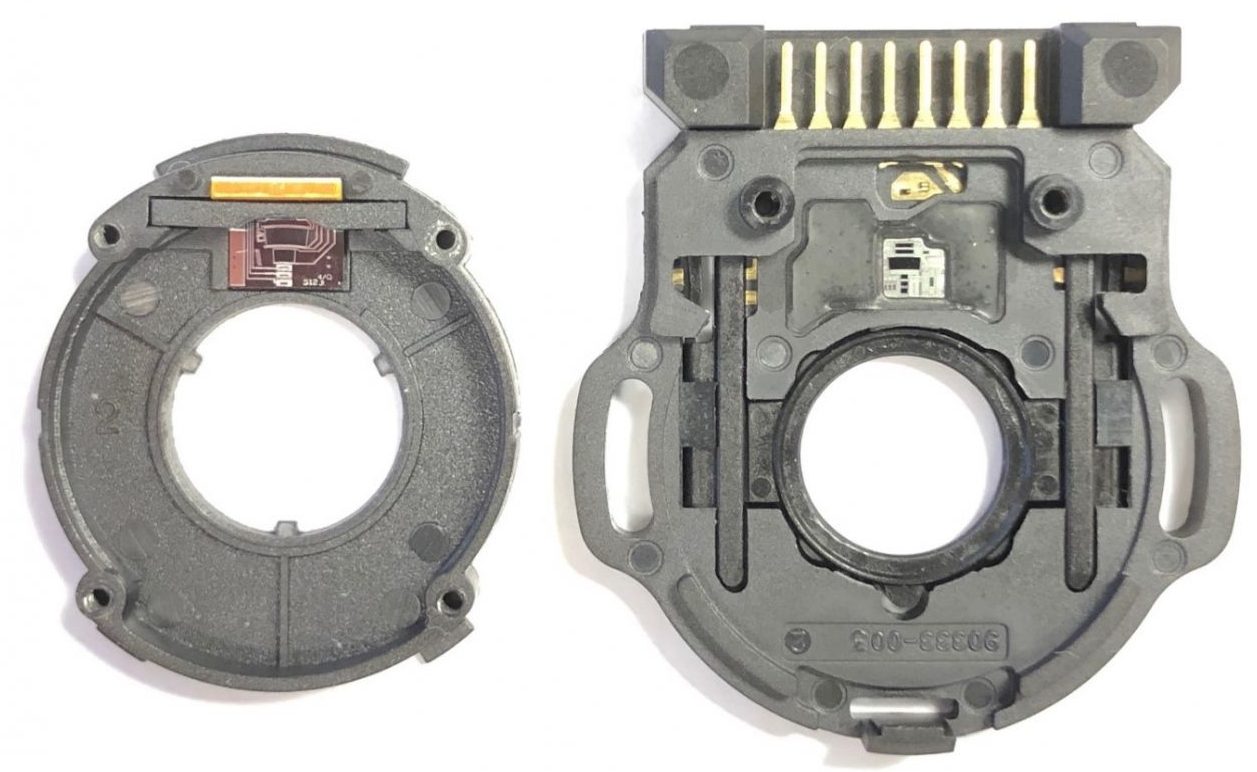 As to the sensor connections, the redundant connections on the Quantum Devices design offers better thermal cycling performance than the singular wire bonds in Competitor’s Encoders A & B.

The following photographs were taken under a microscope at 50x magnification to compare the sizes of various features of each photodiode sensor. For illustration, the QML35 and Competitor’s Encoder B were chosen; these are the same basic sensor designs as in their respective full-compliment counterparts (QM35 and Competitor’s Encoder A, respectively). The red boxes illustrate the general area where measurements were taken.

These photographs illustrate the overall envelope of active photodiodes. This area encompasses all of the photodiode arrays. The Quantum Devices QM35/QML35 has a 50% overall larger envelope. Also indicated are the locations of the photodiodes for incremental (A/B), index (Z) and commutation (UVW) signals.

For sake of this discussion, the QM35/QML35 disc was compared to the metal disc Competitor uses in Encoders A & B (Note: Competitor’s Encoder A uses a glass disc for line counts above 5000). The photo below shows a side-by-side comparison of the Quantum Devices QML35 (left) and Competitor’s Encoder B (right) discs. 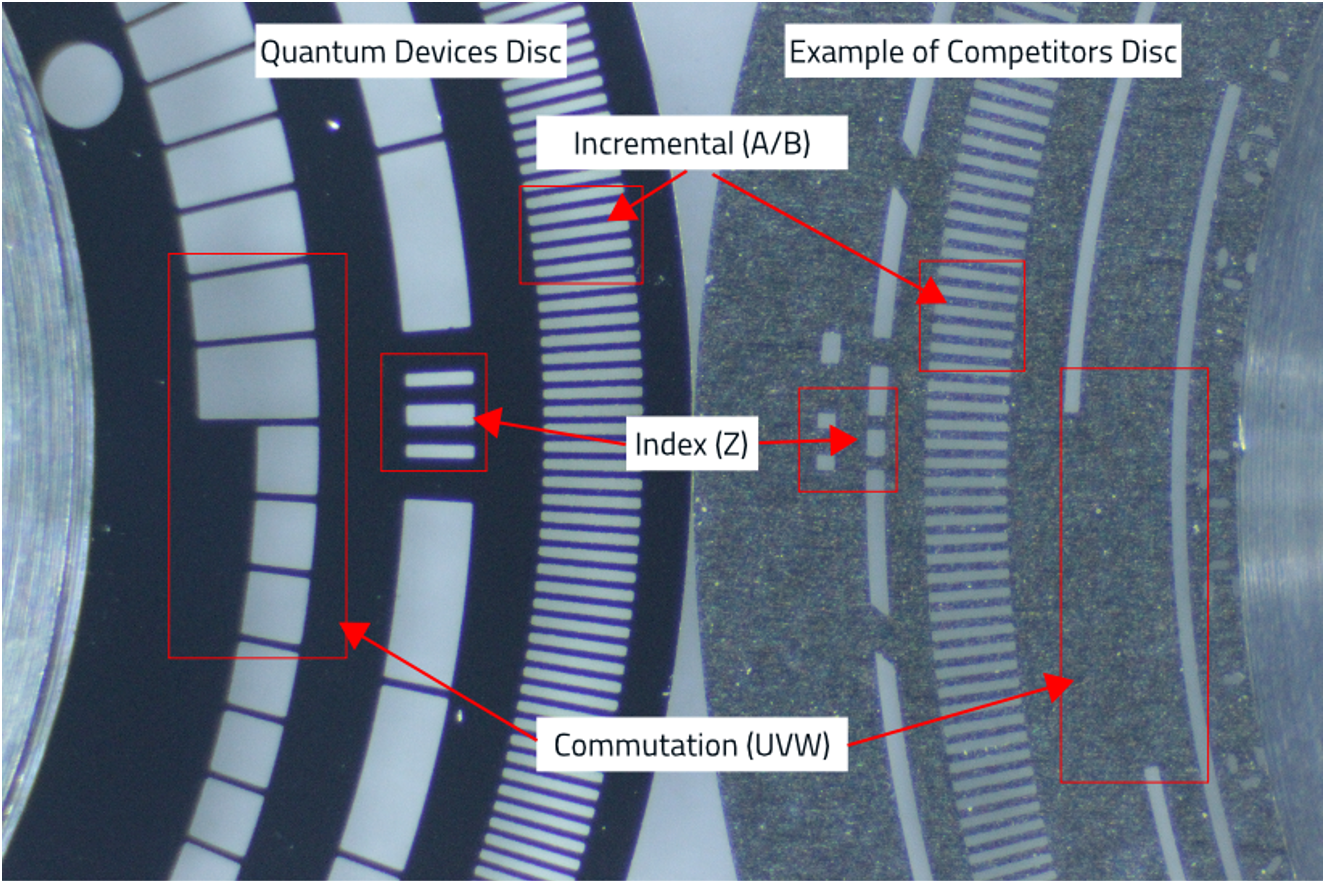 The openings for incremental, index as well as commutation channels are noticeably larger on the Quantum Devices QML35 disc. These larger disc openings tend to decrease the chance of contaminants on the disc occluding the light path from light source through disc to sensor. Conversely, the limited disc openings in the Competitor’s designs are more prone to collect debris, causing obstructions to the light path and errors in photo detection. The same designs are employed in their respective full-compliment counterparts (QM35 and Competitor’s Encoder A, respectively).

Another difference between the two discs designs is the disc thickness. The Quantum Devices disc is about 40% thicker than Competitor’s Encoder B disc.

The photos below look to compare the effective sensing areas as constricted by the disc and/or sensor. This is the area that determines the amount of photocurrent that each photodiode is able to produce.

The effective sensing area of the A/B incremental channels on the Quantum Devices QML35 encoder (above, left) is 54% larger than Competitor’s Encoder B (above, right).

Moreover, the larger A/B array and larger A/B disc tracks yield well over two times the allowable disc runout (TIR) in the Quantum Devices design – that is, the radial distance the disc can travel before it is not aligned with the photodiode.

Taking into consideration these design differences, the Quantum Devices QM35/QML35 design allows for approximately 20% more sensing area in the commutation channels. More impressive, however, is the 108% larger runout on the commutation channels. The same holds true with the index array; in this case, the Quantum Devices design allows almost 3 times the runout.

Overall, the larger effective sensing areas across all three channels (incremental, index and commutation) allows for an increased immunity to contamination as well as larger analog signals; this translates to a better signal to noise ratio. The significantly greater allowance for runout across all three channels affords greater flexibility in overall product design.

The light source used in both the Quantum Devices QM35/QML35 as well as Competitor’s Encoders A/B is a Light Emitting Diode (LED). The Quantum Devices QM35/QML35 LED is hermetically sealed with a TO-46 high reliability welded metal package and a glass lens. The metal can acts as a heat sink for the LED, the glass lens provides a consistent and reliable collimation of light, and the welded package ensures the LED is protected in a controlled environment. 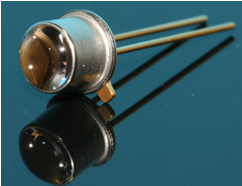 Within this package, the LED die is of the latest technologies developed for the lighting industries. Furthermore, all LED lots are tested for 1,000hr degradation at 115°C at 1.35x of the application drive current.

The LED in the Quantum Devices QM35/QML35 design is mounted to the PCB. A traditional transmissive optical encoder design is used, whereby the light source is located directly above the sensor, and the code disc sits in between the two. The following shows an LED package as mounted in a QM35 PCB:

In contrast, the Competitor’s Encoder B LED is surface mounted on the sensor base and is left open to the operating environment (below, left). There is no coating or environmental protection for the LED die. The LED bottom side electrical connection is bonded with silver conducting epoxy to the gold terminal pad. Quantum Devices has evaluated failed Encoder B’s (below, right) whereby the cathode pad of the LED has shown significant signs of corrosion. Discoloration of the die mounting surface is evident and corrosion is visible at the silver conducting epoxy bonding the LED die to the gold terminal pad.

Competitor’s Encoder B design uses a plastic reflective lens on the top cover which reflects the light from the LED die down through the disc back to the sensor mounted in the sensor base. While still considered a transmissive optical encoder, in this case the light source is reflected around the disc. Due to the optics at play, any debris on the LED die could easily obstruct or significantly reduce the light intensity. The same theoretical debris on the lens, on the other hand would have minimal effect due to the diffusion of the beam of light. 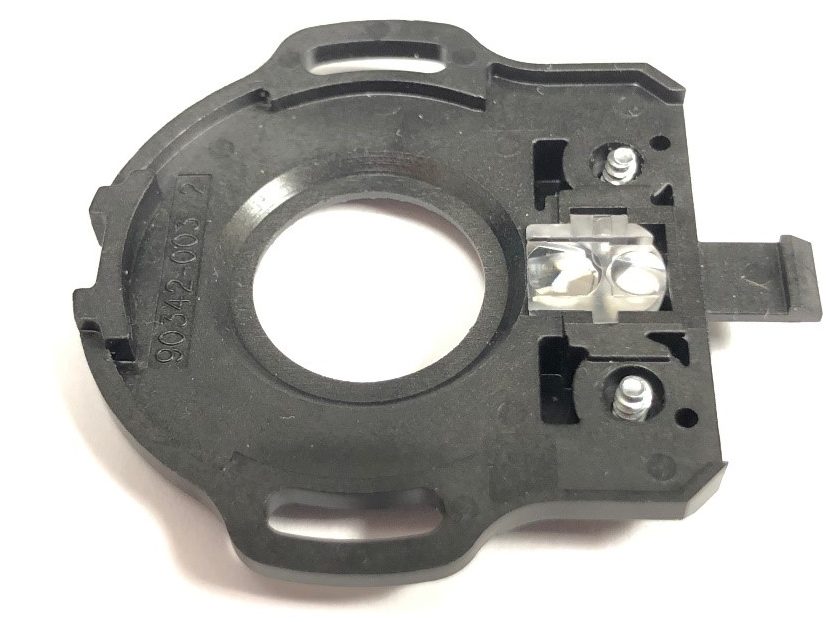 Overall, these design differences introduce several potential failure modes in Competitor’s Encoder B design which are not present in the Quantum Devices QM35/QML35 LED. This includes: debris on the LED die obstructing or significantly blocking the light source, variations in location of the LED with respect to lens (in all three directions), susceptibility of color changes in the plastic lens and deterioration of LED die and/or connections due to environmental concerns. 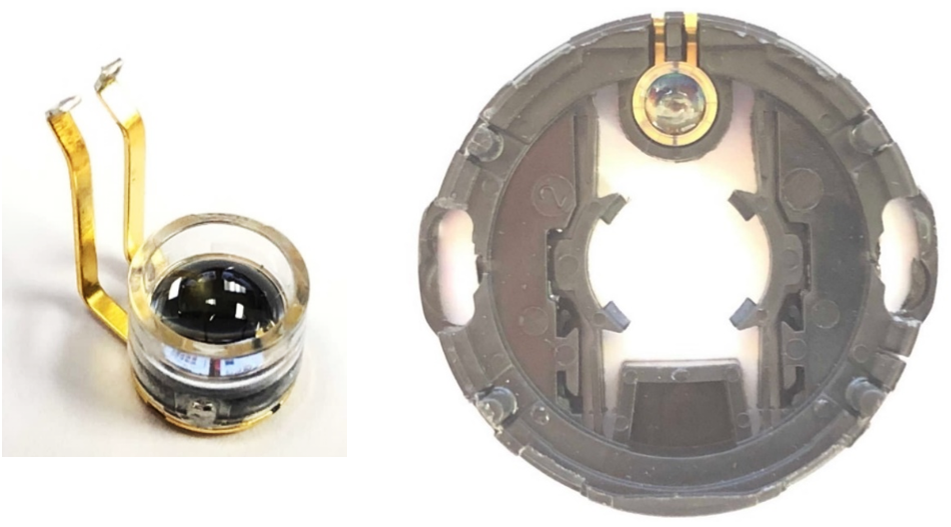 Illustrated below is the construction of the LED used in Competitor’s Encoder A. The LED is located in a black molded plastic carrier with clear plastic lens placed over it. While the use of a plastic lens in Competitor’s Encoder A design at least partially covers the LED die, it certainly is not as effective as the hermetical seal in the Quantum Devices TO-46 metal package at keeping the LED die from possible contact with ambient contaminants, nor does the plastic carrier offer as much heat dissipation as the metal can in the Quantum Devices design.

The Quantum Devices QM35/QML35 design features an easy lock-n-twist assembly feature which raises the hub into position during mechanical assembly. By utilizing a pair of mating conical features, the axial and radial positions are set with one process. This locks the appropriate disc/sensor gap into place. Next, if dynamic alignment of U/V/W commutation signals is required the PCB can be rotated independent of the fixed base to time the encoder. 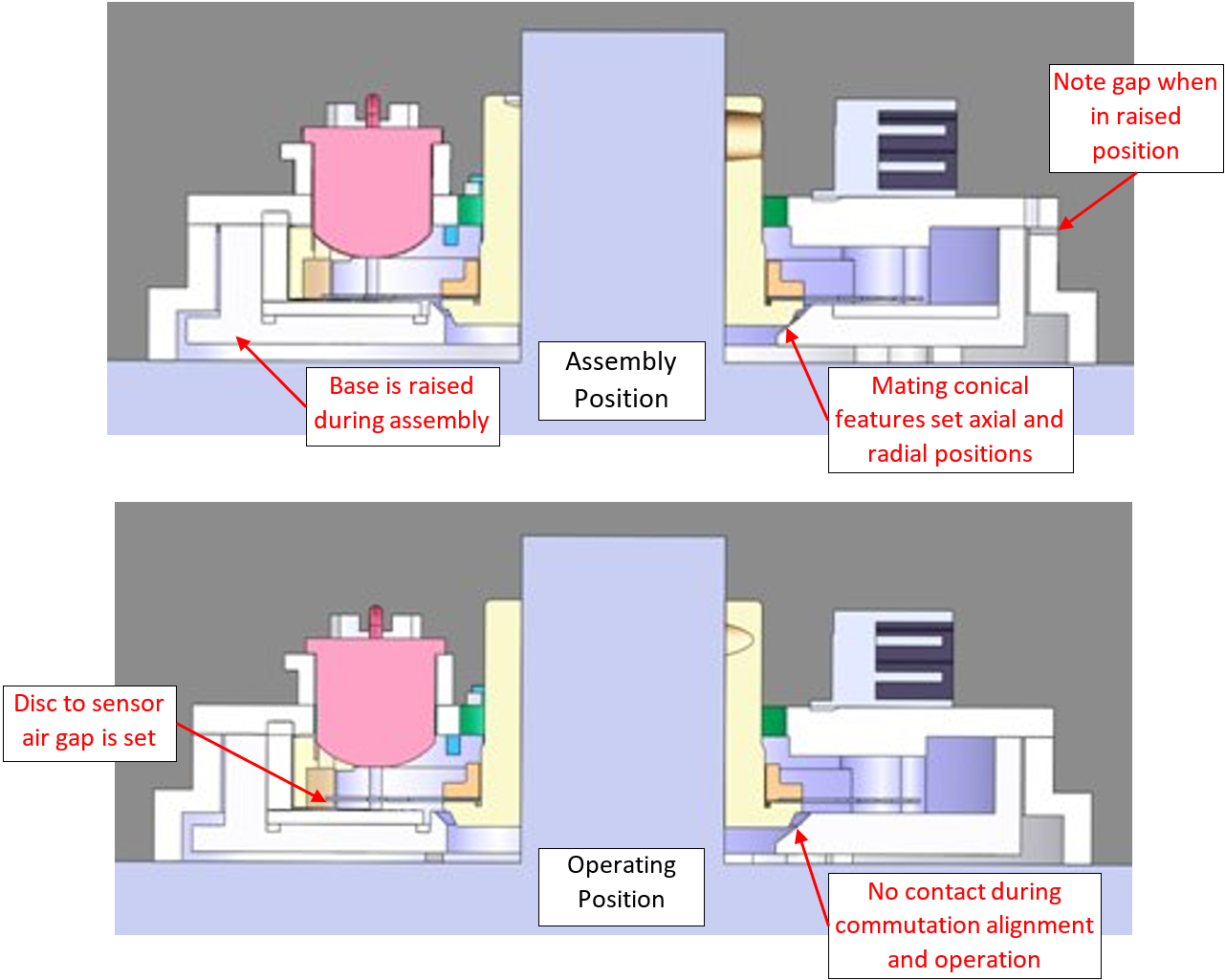 The Competitor’s Encoders A & B also contain a built-in axial gapping and centering mechanism. While Competitor’s Encoder A & B are slightly different from each other, they both are based on a Slide-Lock mechanism which raises an internal centering ring. In both cases, dynamic alignment of commutation signals is done while the metal encoder Hub is contacting the polymer centering ring to maintain gap and position. This design causes chafing of the softer polymer material, until the encoder commutation channels are properly aligned. The Competitor’s Encoders A&B installation instructions limit rotating contact time to 60 seconds at 500 RPM or less to minimize the damage done by this chafing.

The core difference between the Quantum Devices and the Competitor’s commutation alignment design lies in the location of the alignment ring. The QM35/QML35 design incorporates a separate Alignment Ring in addition to the encoder Base and Hub. This Alignment Ring allows the Base and Hub conical features to be separated during the encoder commutation alignment to the motor windings. Meaning, when the motor shaft is rotated during the alignment process, the Base and Hub features are not allowed to contact eliminating polymer chafing.

Quantum Devices has evaluated failed Competitor’s Encoder B’s which have shown excessive chafing (see below). The liberated polymer fibers from chafing tend to find themselves in the small disc openings and obstruct the light path, causing poor or faulty signals. 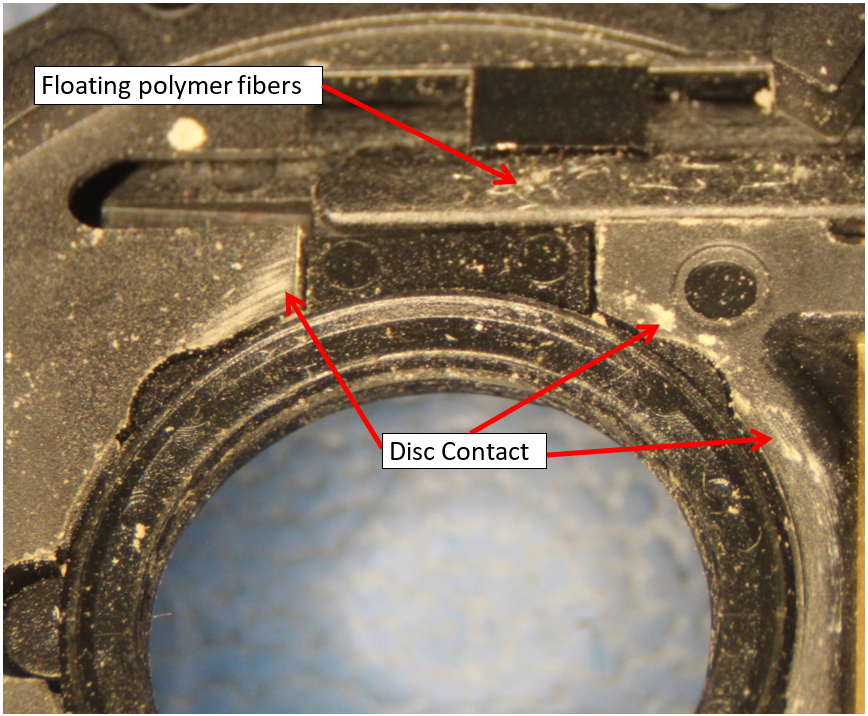 There are substantial differences between the designs of Quantum Devices’ QM35 and QML35 optical encoders and those of Competitor’s Encoder A and Encoder B. These include:

Quantum Devices has designed these encoders to provide the most reliable signals with a simple assembly process and larger allowable tolerances for the customer. The end result is an encoder that is reliable, affordable, forgiving and designed with customers’ needs in mind.