While most of us are familiar with how to measure something in mechanical degrees, incremental encoder signals are measured in electrical degrees. 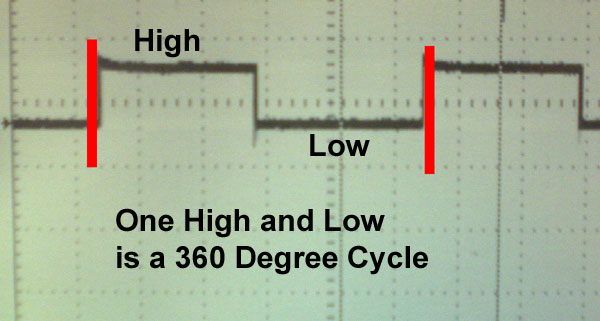 Why Measure in Electrical Degrees?

We measure Incremental Optical Encoder signals in electrical degrees because this gives us a number that is not depended on other information. If you were to talk about the high time of your encoder signal being 10 milliseconds, it doesn’t say anything about the quality of the signal unless you also talk about total cycle time.

An electrical degree specification gives us information about the signal with just one number.

The ideal output for an incremental channel is a waveform with a 50/50 duty cycle. This specification is termed “symmetry” and called out in electrical degrees. Ideal symmetry is one where the high and low times of a channel are each 180 electrical degrees.

Some oscilloscopes will have a way to measure electrical degrees directly by setting a  full cycle to 360 degrees. In this post I am going to assume that your scope doesn’t have that feature and calculate electrical degree symmetry measurements using the high, low and cycle durations as measured in time.

In the photo above the duration of a full cycle is 50.00 uS.

In this next photo, we adjust the cursors to check the High time of the A channel we see that it is 24.80 uS

To find what this time would be in electrical degrees, we calculate as:

Note that to get the most accurate measurement you will want to widen out the cycle as far as possible.

Channel B is measured in the same way.

Minimum A to B edge separation is an important measurement as the more time you have between the edges, the easier it is for a drive or controller to “see” the data coming in. This is particularly true with older equipment and when running at high speed.

Ideal A to B edge separation is 90 electrical degrees. To find edge separation in an incremental optical encoder look for the smallest separation between adjacent edges of all six edges within an overlapping set of  A & B cycles.

To change from time to electrical degrees, we use a calculation similar to the one used for symmetry. 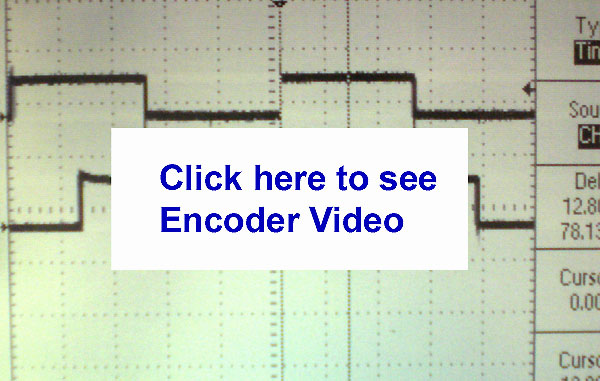 Quantum Devices Inc. is a leading manufacturer of optical rotary encoders. Visit our encoder store or contact us online with any questions.