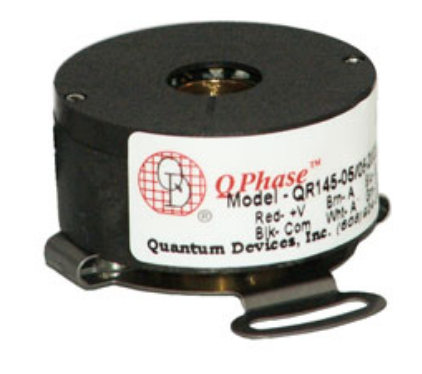 An optical quadrature encoder is an incremental encoder with outputs consisting of two incremental channels that are out of phase by 90 electrical degrees. In each part of the encoder cycle, the two signals are in unique positions relative to each other. By comparing the difference between the high and low points of each signal, speed and direction can be determined.

A popular application for quadrature encoders is mounting them to an electric motor to track the speed and position of the motor shaft. Incremental optical encoders will often provide commutation “Hall signals” for timing of the BLDC windings, but in this case we’re looking at the incremental encoder channels, specifically A and B encoder channels.

One of an encoder pulse (either High or low) is nominally 180 electrical degrees in duration, as seen below:

Why set up the incremental optical encoder signals into quadrature? The reason is to give us rotational directional information. If we take either channel A or  channel B and count how many of the pulses have occurred, it tells us how far we have gone in distance. If we were to compare that against a certain amount of time we can tell us how fast we are going (RPM for example), but it takes BOTH signals to tell us the direction in which the encoder shaft is rotating.

We are able to tell direction by finding which optical encoder channel transitions from low to high first. We do this by finding the point at which both signals are low, then look for the next rising edge.

If the shaft on the rotary encoder is spinning in the opposite direction the relationship between these two optical encoder channels is reversed.

There is a third encoder channel called the index pulse (aka Marker, I, or Z channel). We have a separate page dedicated to how index pulse gating works.

Shop online in our encoder store, or get in touch to request a customized rotary encoder.

Contact Quantum Devices online, or give us a call with any questions.