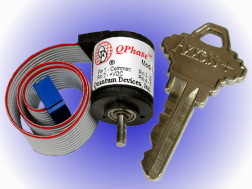 Gray code was named for Frank Gray, a Bell labs researcher, who patented the procession in 1953, even though a form of it was used by Emile Baudot for telegraphy as early as 1878.

The most important thing to understand about Gray code is that only one bit changes from transition to transition. In binary it is possible for a number to go from all ones to all zeros, as is the case with 11111111 (255 decimal)  going back around to 00000000 (zero).

The advantage to only one bit changing in Gray code is that it gives you error-checking ability. If you sum the number of bits, the bit total will always change by only one.

You could also do some error checking knowing that the bit sum will always alternate between even and odd.

Only one bit changes from transition to transition.

The QD787 absolute encoder shown at the top of this post has an option for an eight bit Gray code output. Update: encoder model QD787 has been discontinued. Quantum Devices does not offer an absolute encoder at this time.