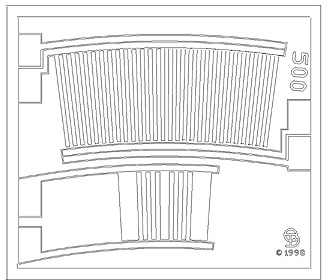 If you search the web for a rotary encoder tutorial on incremental encoder construction, the simplest two channel A & B style encoders talk about a light source and a single photo receptive element for each channel.  The light beam of this optical pair is then interrupted by the rotating optical encoder disk. The light shuttering from the disk occurs over rotation, alternately illuminating and darkening the single element sensor.

The photo sensor turns the intermittent light beam into low level electrical signals which are strengthened and squared up with some type of comparator circuit. This creates the rotary encoder output pulses.

There are a few weaknesses in this basic design for example, what if the light source strength changes? This can happen over time and with increased or decreased temperature. A varying light source means that the signal out of the sensor will vary and possibly effect the decision point at which the rotary encoder channel is driven high or low. This variation in decision point results in real positional error and needs to be avoided. In order to combat this a differential sensor circuit is used.

In a differential circuit two sensors are placed so they are 180 electrical degrees out of phase. What this means in simple terms is that when one is “on” or illuminated by the light source, the other sensor is in the shadow or “off”. By maintaining the relationship between these two sensing elements, the ambiguity of a varying light source can be common mode errored out. The light level is no longer important, but instead the relative relationship between these two equal and opposite sensors is now what matters.

There is, however, still a weakness with this set up. As we increase the line count of the encoder, the geometry of the disk and sensor elements becomes very small. This opens up concerns for anything that may occlude the disk, such as debris or other contamination.

A way to handle this is by breaking up the individual differential sensor elements into several interlaced sensor elements over an array.  Instead of a single element and its complement, there are many elements and again as many complementary elements that are alternately positioned on the sensor. As the optical encoder disk rotates, multiple window openings align with the elements illuminating them and darkening multiple complementary elements at the same time. The signals from all of these elements are summed together. The complements are compared against the fundamental elements to determine a switching point.

The advantage to this set up is that the sensor becomes spread out over a wider area along the disk and needs multiple disk segments to activate it. This makes the reliance on any one individual disk or sensor segment less crucial to the overall signal integrity. This also eliminates the need for potentiometers in encoders. If there is any debris that makes its way onto the disk, or even creates total blockage of one or two sensor segments the output signal will not be effected.

The shadow technology sensing scheme patented by Quantum Devices Incorporated also  corrects for disk centering problems such as disk eccentricity and disk wobble, where the movement and alignment of the disk varies in three dimensions, and normally creates variations in signal amplitude and ultimately output signal.

Quantum Devices is a leading manufacturer of rotary incremental encoders. Contact us online for assistance in encoder selection, or reach us at (608) 924-3000 or via E-mail