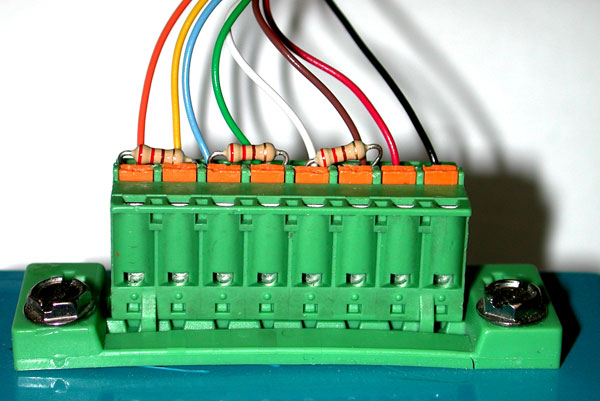 Since most electronics are set up to have high input impedance, in some situations the addition of a loading or “termination” resistor can help to reduce interference from electrical noise.

This can be of particular help when implementing an incremental encoder where there is a long cable run. If the input impedance of the receiving device (often a controller or drive) is high, the current through the cable is very small. The addition of a termination resistor where the encoder is connected to the controller/drive increases the current flowing through the cable. This increased signal current is less susceptible to interference of any electrical noise that may be coupled into the cable.

The termination resistor is placed in parallel with the output in a single ended set up; this connection is from the encoder channel to signal ground. In a differential setup, this connection is between the channel and it’s complement (A and A-, B and B-, etc…)

Values of termination resistors depend on the current capability ability of the encoder. Our standard incremental encoders can deliver up to 20 mA per channel, which at 5VDC means a maximum total termination load of 100 ohms.

When troubleshooting a noise burdened application, we tell our customers to start with a value of around 1K ohm and go from there. Many times, 1K is more than enough resistance to solve a noise interference issue.

I would also like to point out that this type of termination loading should be done on each channel as each channel is a separate circuit.

The 100 ohm value spoke of above works for Quantum Devices rotary incremental encoders. Other  encoders may not have the ability to deliver current into such heavy loads.

Below is a pictorial example of how to add termination resistors to an incremental encoder that is set up single ended (TTL). 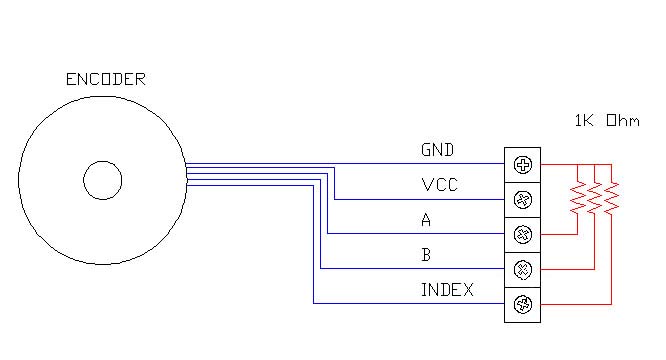 Below is an example of termination resistors wired into an Incremental Encoder that is set up differentially (RS-422). 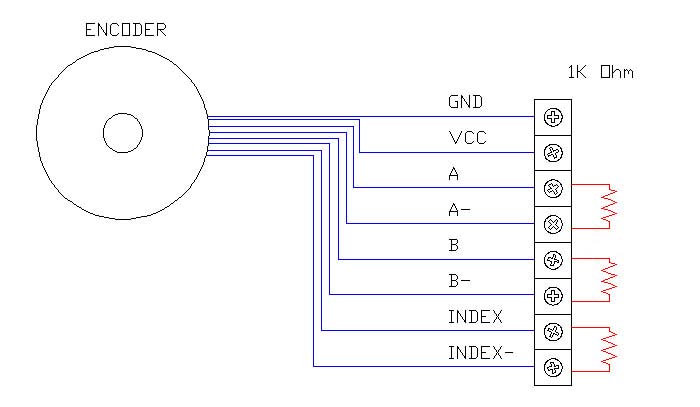